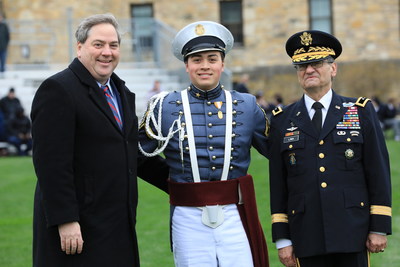 The Governor's Medal for the State of Wisconsin is awarded to a cadet from SJNA's Junior Class who, in addition to being a resident of the state of Wisconsin, best exemplifies the qualities of outstanding patriotism, attention to duty, and academic excellence within the Corps of Cadets. As the recipient of the Governor's Medal, this cadet has been nominated to attend the Badger State Boys Competition this summer.

Thometz is concluding his first year attending SJNA. Described by teachers and peers as a model cadet; Thometz is motivated, kind, conscientious, and helpful with a high level of integrity and solid character. He also excels academically, currently holding the highest GPA in his junior class.

Upper School Dean Mrs. Stephanie Ihler states, "Brian is an excellent history student, and as such, Mr. Jon Bennett recommended him to participate in a local project out of Pewaukee called the Bell Tower Project." This organization seeks to document the lives and stories of our local veterans so that they can be digitally archived in the National Archives in Washington, D.C.  Ihler continued, "Brian has done an outstanding job learning first-hand through a complex interview process about the veteran's service to our country for the national archives. Brian is an all-around exemplary cadet and young man."